Drinking chocolate (the most efficient form of delivery)

Everyday hot chocolate is a joke, usually little more than weak hot chocolate milk. The idea that milk belongs in chocolate certainly seems American (i.e. corporate American), although I'm not letting the Swiss off the hook here. For the last couple of years I have regularly indulged in real, straight and sometimes very thick dark drinking chocolate in the mornings (and sometimes afternoons, but never evenings - read on). Real drinking chocolate should generally consist of only TWO things - semi-sweet dark chocolate and very hot water. Adding milk (or using only milk) in absolutely NO (never mind I am mostly a vegan, it's just unnecessary, and ruins the intense chocolate experience).

I first discovered true dark drinking chocolate at The Bitterweeet Cafe in San Francisco (now in Oakland and Berkley, CA). Eight ounces of finely ground quality dark (probably 70% or so) semi-sweet chocolate in very hot water, and nothing more. Besides the amazing flavor, it's quite the stimulant - the first time I had this "shot" I was practically dancing within a minute (and I DON'T dance). This creates quite a buzz, and I would not recommend it after 6pm if you want to sleep that night! One of the privileges of playing in two San Francisco-area bands is that I am regularly in the area and can go to The Bittersweet Cafe. Please open one in Los Angeles! 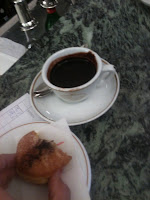 In my 2012 trip to Europe, I traveled to a few cities in Italy, the motherland of this style of hot drink. It's considered an adult drink there; while in Florence, every morning I walked to the Caffe Rivoire (see photo) for the ultimate drinking chocolate - very rich, very thick, very satisfying. I first found this drink in Venice, but the shop there made it much thicker - more like a pudding - and served it (necessarily) with a spoon. Moving on, I also hit gold in Barcelona - also VERY thick (it must have had flour mixed in it), and two shops up from an amazing churro maker (also available dipped in chocolate - I put on ten pounds during this 2 week trip, even with lots of walking). 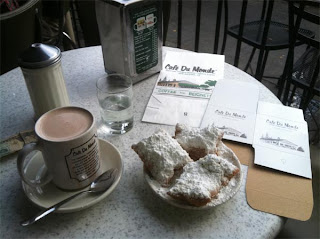 I have the privilege of traveling quite a bit while performing, and while in New Orleans I  discovered and frequented the Cafe Du Monde, with its famous and fabulous hot powdered beignets, served with a passable hot chocolate (too weak, too much milk). The beignets made the hot chocolate worth it, and I was grateful they had more than just coffee (which was supposed to be good, but I don't drink it, so...). The day I was leaving I went back very early, even stealing some untouched but abandoned beignets on the adjacent table while waiting for my order... 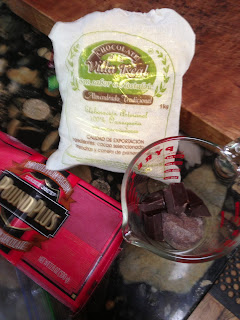 In Los Angeles the drinking chocolate tradition belongs to the Mexicans, specifically from the Oaxaca region (with their amazing Moles). There is a famous Oaxacan restaurant on Olympic Blvd here in Los Angeles, called Guelaguetza, where I order sweet corn and raisin tamales and drinking chocolate. They make it a bit thin, and without milk (when requested), but I buy a bag of their chocolate and make it at home - thicker and mixed with whatever other dark chocolate I have lying around (Mexican drinking chocolate usually has some other spices in it, including cinnamon and some chile, which I prefer to dilute). This morning I dropped one round piece of Mexican chocolate and four squares of Belgian 70% dark from Trader Joes (their Pound Plus bar is excellent) into 1 1/2 cups of hot water, then microwaved for 90 seconds to melt the chocolate. Stir it up with a fork, pour it into a mug, then sipped onto the tounge! This particular batch of Mexican drinking chocolate has a bit more spice than I prefer, but it got better and thicker as it cooled off. 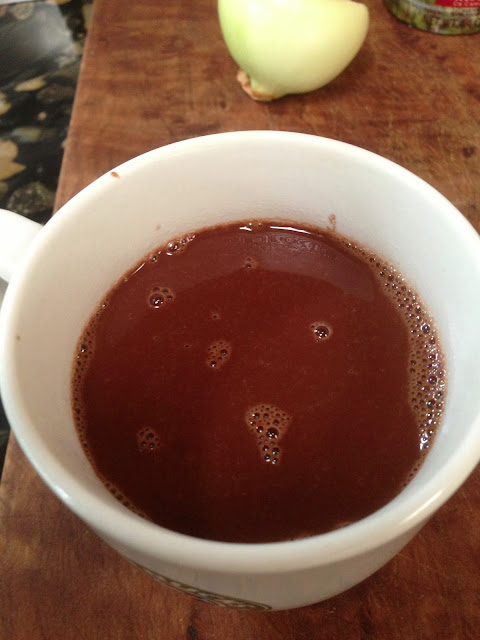