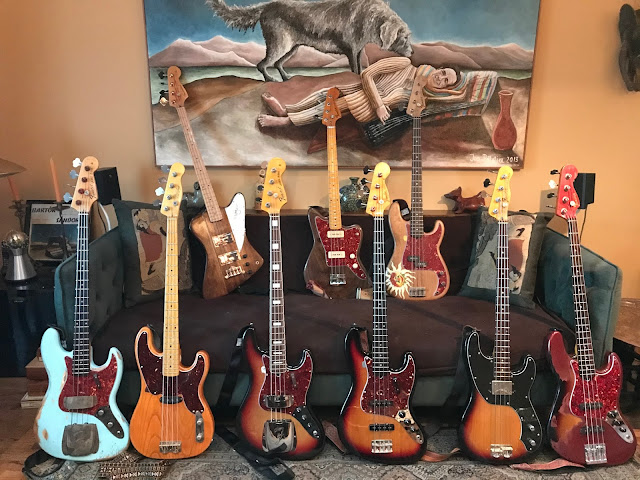 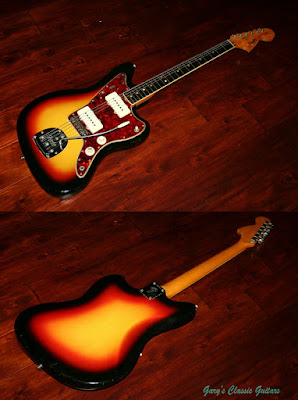 A classic Fender Jazzmaster guitar is a very pretty thing, especially in my favorite dress: sunburst body, red tortoise pickguard, cream pickup covers, oversized headstock on an amber neck (ooh, baby, you had me at sunburst). Unfortunately for me I am a clumsy and irritable guitarist - there's just a few too many strings, and they are too close together. Fender never made a bass version of what was the predecessor to the Stratocaster, unless you count the Jazz Bass (which is certainly related in many ways). I've had a walnut a one-piece sorta Jaguar/Jazzmaster blank kicking around my shop for a few years now, purchased at a bargain from a tonewood supplier who cut the body shape out himself, and not in a particularly great way.  I've been looking at it in my shop for quite a while, and have seen a couple of custom Jazzmaster basses online, but not quite as I envision. Since it's not a perfect match to replace my beautiful but a-bit-too-lightweight sunburst Squier Jaguar body that is still irking me (basswood=nolowendwood) I might as well make an attempt at my own version of a 30" shortscale Jazzmaster bass. 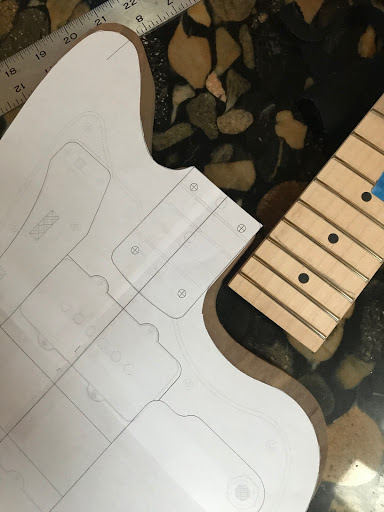 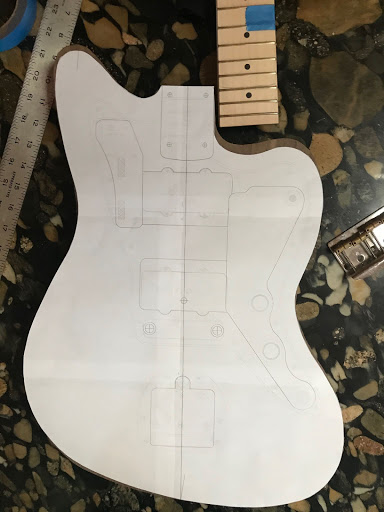 I've also have a set of Epiphone cream-covered P90's kicking around for quite a while (they came with one of the few electric guitars I own, a very nice Epi gold top Les Paul with upgraded Duncan mini-humbuckers replacing the stock P90's). These are pretty fat pickups with a lot of winding, and I'm curious to hear them on a bass, but I was also concerned about single-coil hum, so instead of finally using these I ordered a fairly cheap set that came with one wound in reverse polarity, so using them together would be hum-cancelling (my 2 pet peeves - noisy pickups and head-dive). Placement would all depend on the pickguard, so I tracked down a red tortoise P90 pickguard with as few extra holes as possible (I am stuck only with the two bridge bolt holes which will end up showing because this will require a different bridge, with a different scale than a standard guitar scale), along with cream knobs and a 3-position pickup switch.
For the neck, I contacted a neck maker on eBay and ordered a 30" scale maple paddle-head (so I could cut the headstock shape I wanted). It took a few months to patiently acquire all the parts, but I guess now is the time to try to make this thing. 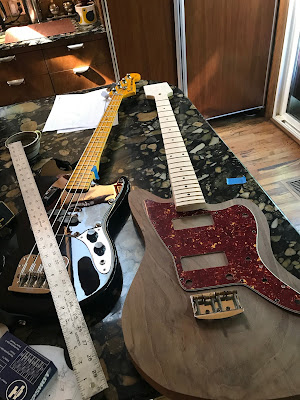 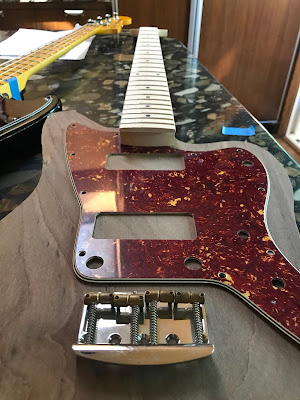 The biggest challenge is going to be the placement of the neck and neck pocket, which decides the routing of the neck pocket and pickups, location of the bridge, the proper geometry for the headstock and tuners, and (if necessary) shortening the neck and re-shaping the heel. Not sure how many frets will be in this thing, or even if the truss rod location inside the neck will allow me to shorten it from the 24 (?) frets there currently to as little as 20. 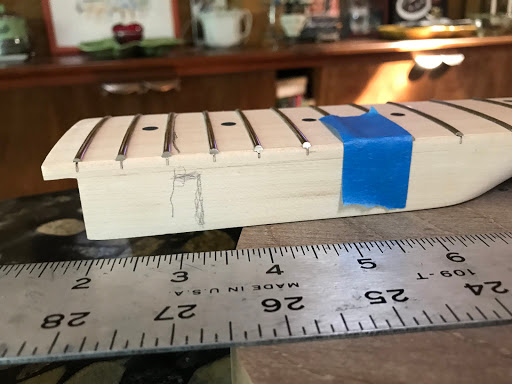 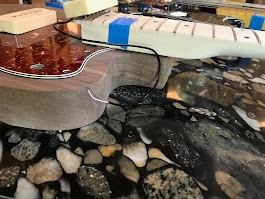 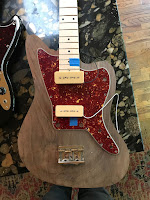 The headstock also presents some challenges - I have some smaller tuners, and want to keep it around the same length as a Mustang Bass (which is a bit smaller than a standard Jazz or P Bass). The angle the pickups are drilled is important to keep the lines straight, and quite a bit of eyeballing was involved to get everything looking right (I guess... the math is way too hard, but I trust my eyeballs). So here we go... 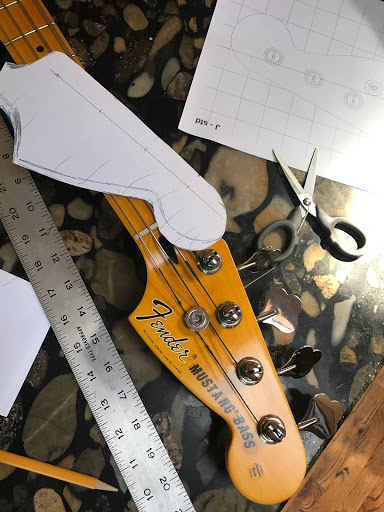 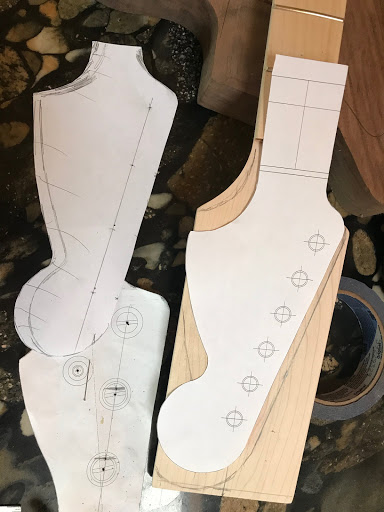 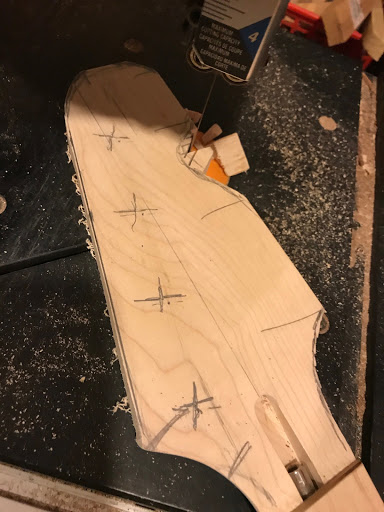 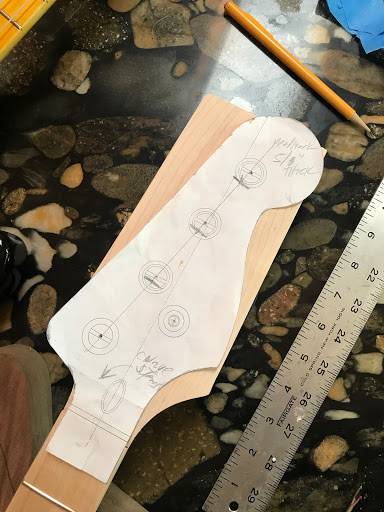 I was able to shorten the neck itself (to a 20-fret version, in order to avoid too much neck imbalance). I got lucky in that the truss rod used by the builder did not extend as far as the 20th fret - I did a smaller cut first just in case I'd have to settle for 22 frets (or ruin the neck entirely). 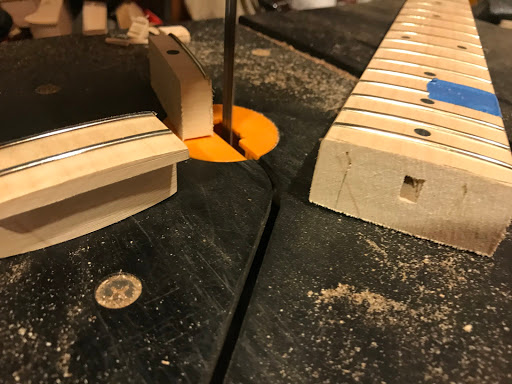 It looks like the remaining heel will still fit a standard Fender heel body route (although I will also check the squarer version before pulling the trigger, as routing is forever). 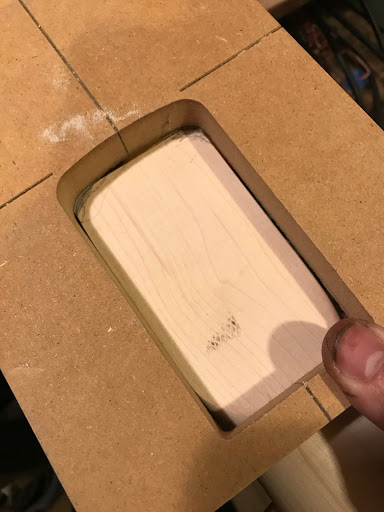 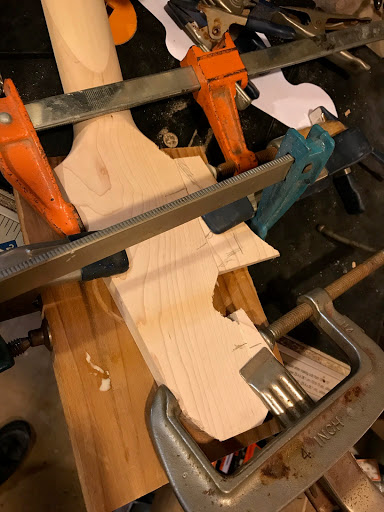 The headstock is requiring quite a bit more work than anticipated, because of course it does. Having just recently done quite drastic surgery to three other Chinese Jazz Bass headstocks (these quite poorly cut at an angle that required serious reshaping and re-drilling), I've gotten pretty comfortable with this Frankensteining of the headstock, and it's slowly shaping up nicely. 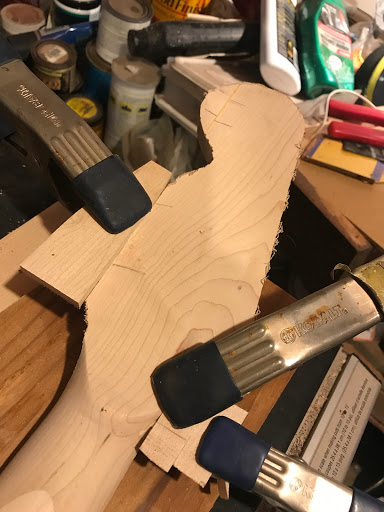 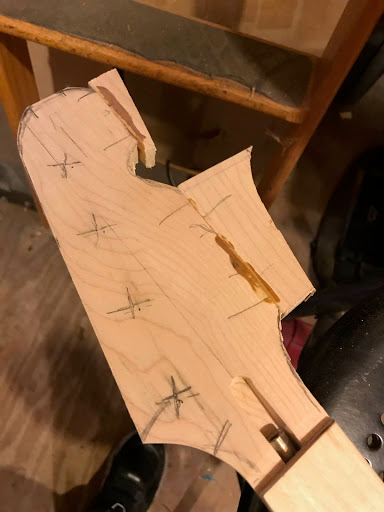 Next up will be finishing the headstock (probably with a layer of veneer on top to clean it up), then shaping the heel so I can get a final placement for the neck heel, pickups and electronics routing for the body.

Posted by Joel Pelletier at 12:43 AM No comments: