Chocobass is Delicious (the build and radical voicing) 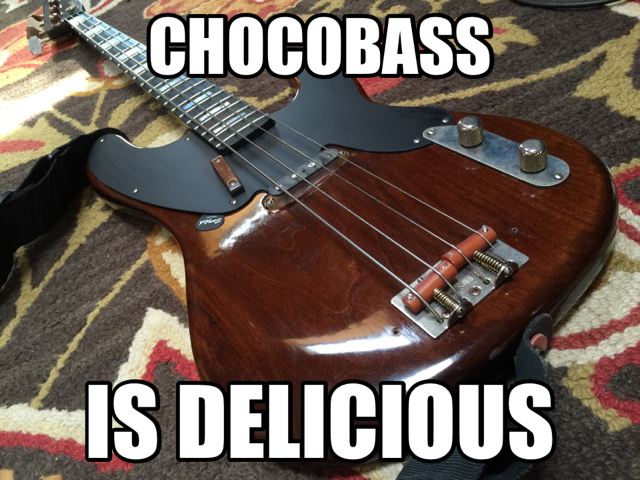 OK, this took way too long to post, but seven months after this build and almost endless adjustments at least I have clarity when it comes to the (very happy) ending of this story. All I have to do is review the photos in order to step back and remember it all.

When we left off LAST YEAR, Chocobass was ready for assembly. All of the parts certainly looked delicious, but you NEVER know how an instrument will feel, play and sound until it's done. There's a certain magic involved in this, regardless of skill level; the randomness of the Universe, where, like a great band, the individual parts come together and - hopefully - combine to make something greater and unexpected. Or at least something playable.

No, playable isn't enough, I have plenty of those. Chocobass needs to be something SPECIAL. 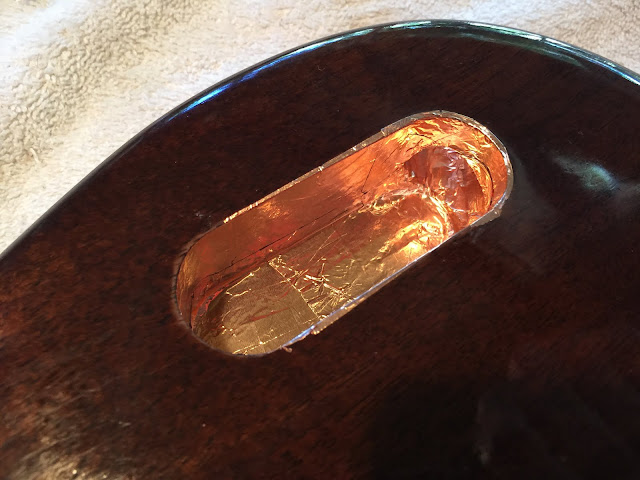 All of the routed areas are shielded with copper tape. 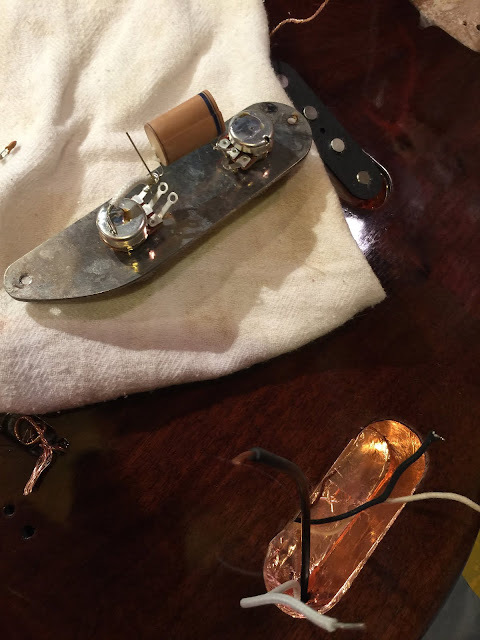 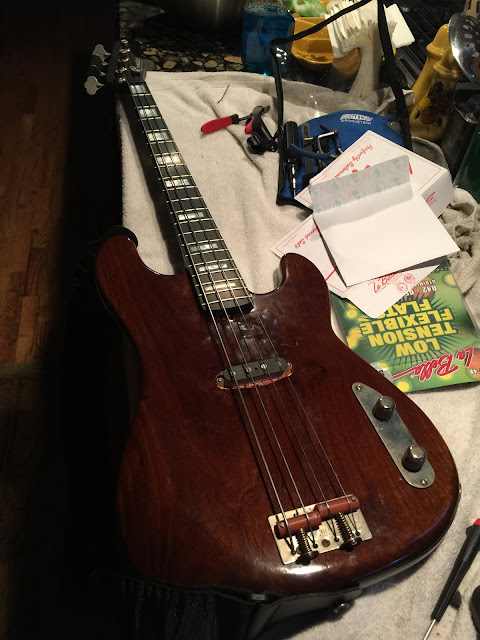 Gorgeous when assembled - too bad the rounded bottom of the neck will require a pickguard to hide the square neck pocket route. 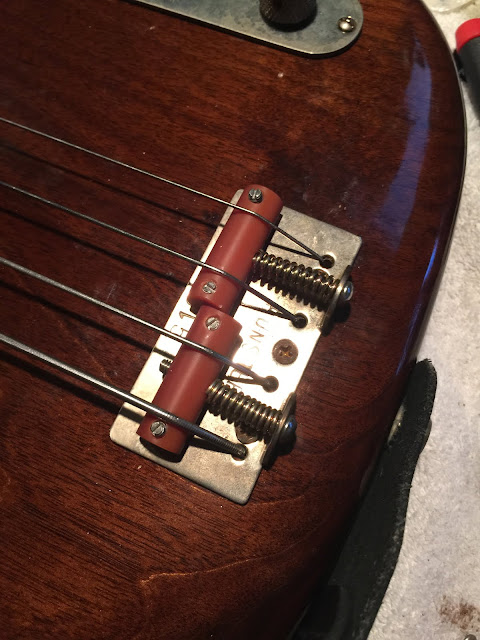 The vintage-style plastic bridge saddles are also beautiful; too bad they will remain hidden under a bridge cover plate. 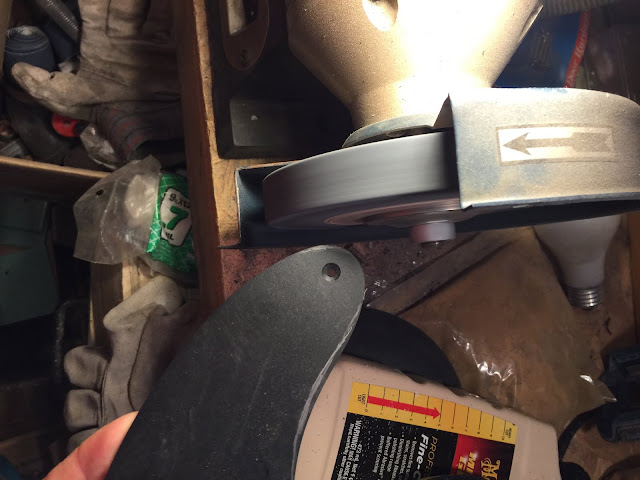 I decided to reshape the Squier pickguard to fit Choco's contours as best as possible, which will ultimately be used as a template for a hand-made pickguard. 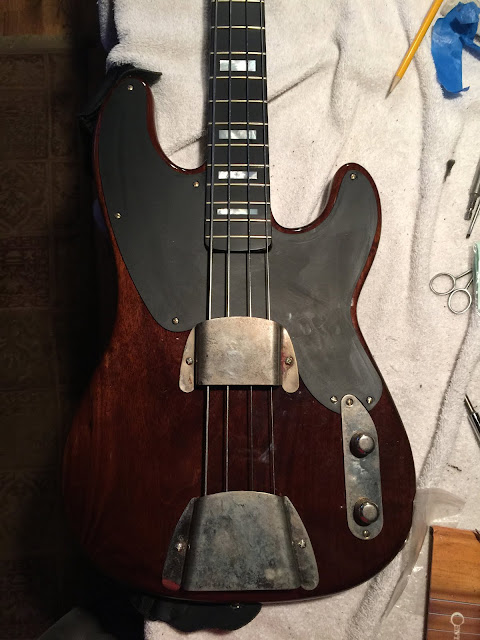 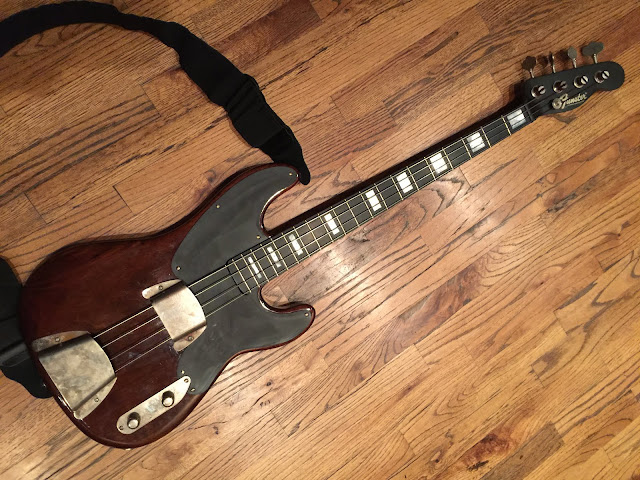 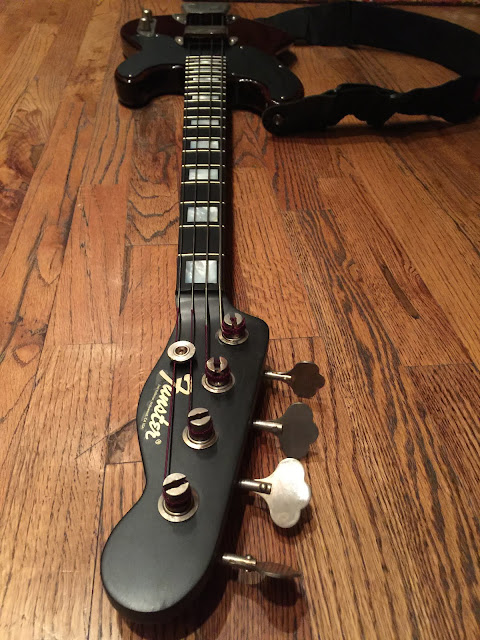 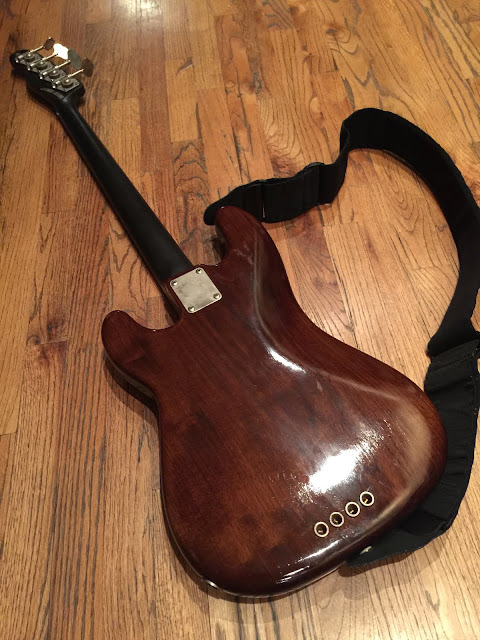 Yes, She's Pretty, But Can She Sing?

Upon completion of this bass, I took it for a spin on my next Zeppelin Live gig, careful to take all my guitar tools along with me in order to tweak as needed. My immediate reaction - what happened to the bottom? This thing is physically the heaviest bass I have ever played, but the E string just disappears, especially from G on down! This brought home one of the problems described earlier - the first P-Basses had a much more defined curve across the front of the fingerboard, so the custom single pickup I had ordered reflected this, with very high A and D pole pieces, which are NOT adjustable. 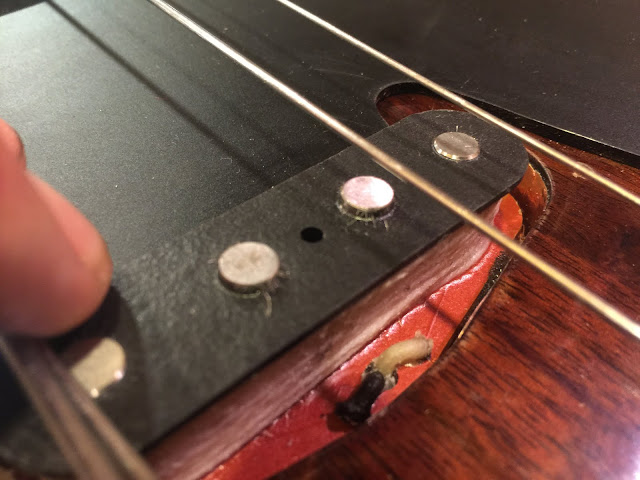 Well, with the help of Mr. Dremmel and some radical voicing, now they are... 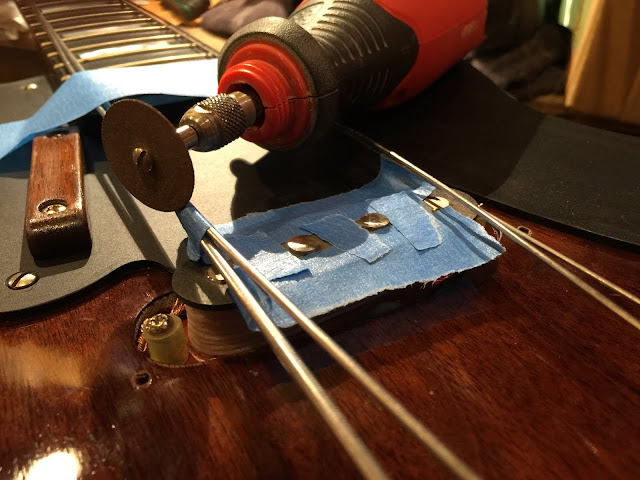 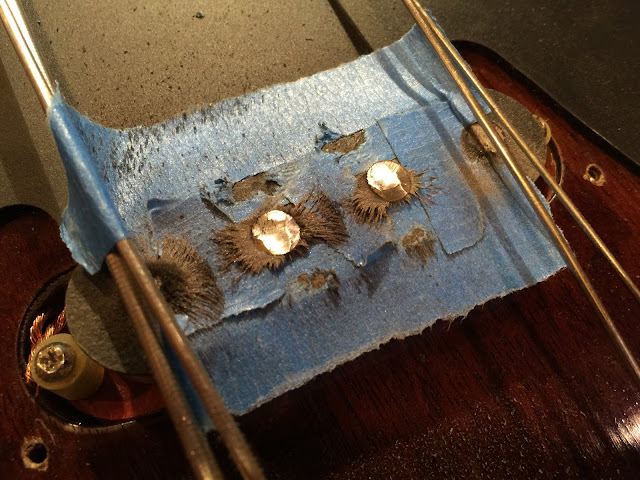 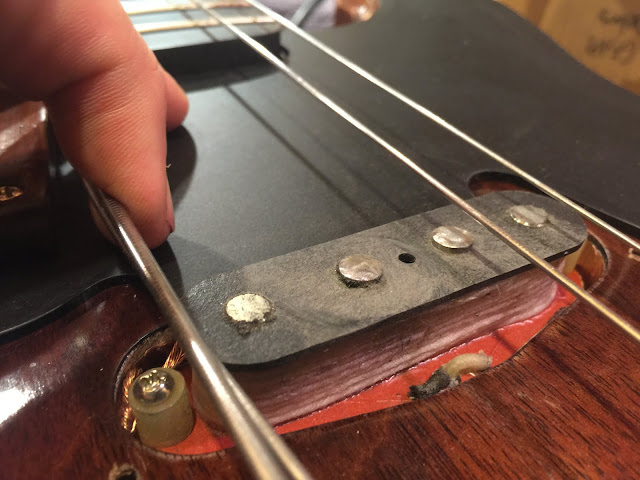 I also found my thumb constantly fishing around for a comfortable place to sit while playing. All original Fender Basses had a "tug bar", which we now refer to as a "thumb rest", installed below the strings on the face of the body. This was NOT designed for the thumb - it was designed to rest the hand and/or fingers on, using the thumb to pluck (or tug) downwards on the strings (early electric bassists were trying to reproduce the sound of a thumpy acoustic bass). Only later in the 60's or 70's did bass players insist on these things above the pickups, so they could rest their thumbs on them and use their fingers to pull/pluck upwards on the strings. I sometimes find myself conflicted when building a vintage-style bass - the thumb rest looks correct below the pickups, but is thoroughly useless to me unless it's above. For Choco, I went for utility instead of correctness, and made a thumb rest from scratch using a walnut scrap from the body, taping it on until I found just the right distance and height for my playing style. 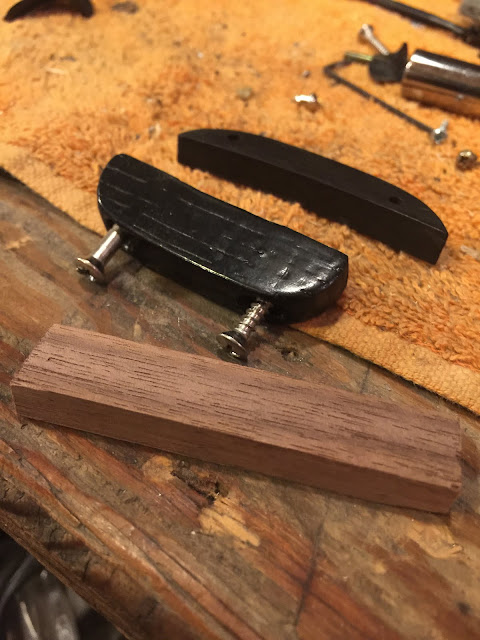 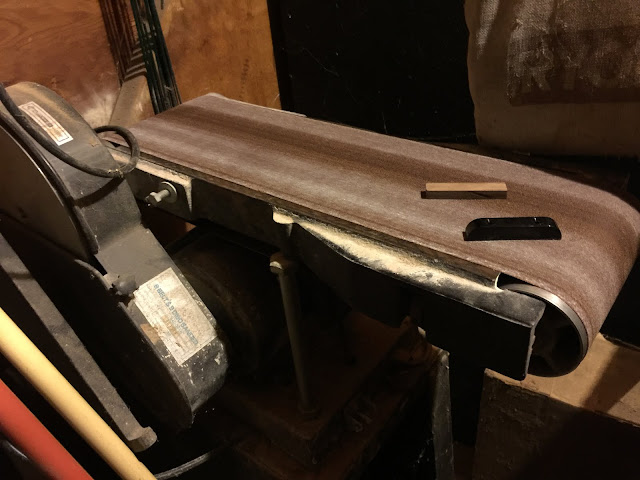 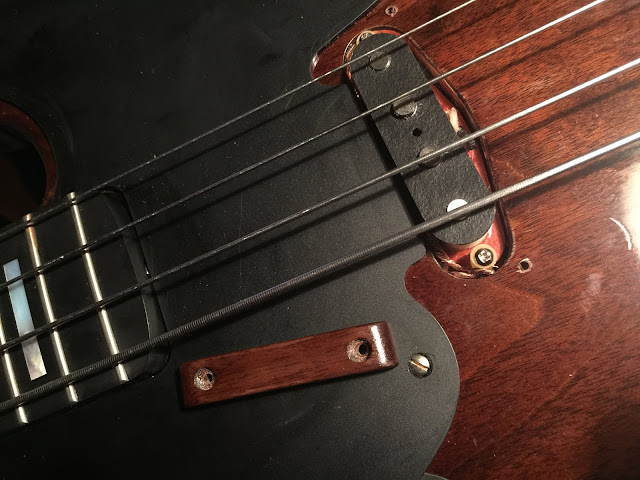 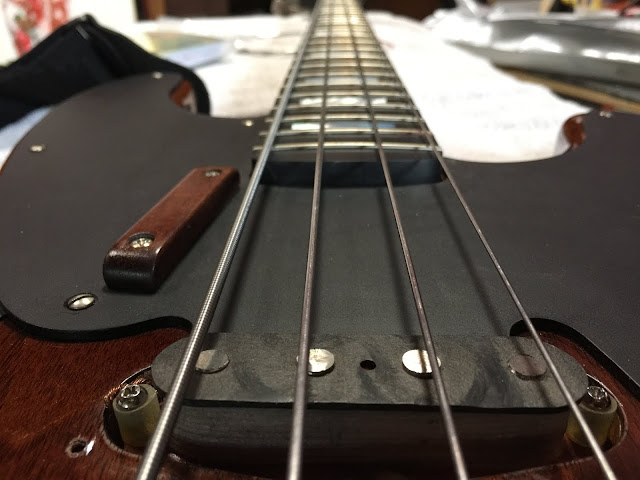 OK, so now it feels better, and the pole pieces are basically all the same height, pretty much matching the shallow curve of the neck. But the E string STILL seemed weak.

My next thought turned to the strings. Maybe I just had a bad E string, like a recent set of rather expensive Pyramids I installed on a Hofner club bass (which they happily and quickly replaced, solving the problem)? I contacted La Bella, and even sent them an audio file of the bass. They insisted it sounded fine to them, but I know what I felt onstage. This was the first time I had tried their Low Tension flats, and perhaps the E gauge was just too light to balance with the other strings. So at the next Zep gig I brought the bass, my tools, and a heavier E string from their Deep Talkin' flat set, and switched the E string during a set break so I could try them both on the same night, with all the same gear.

Conclusion? The heavier string was a bit louder, but the low end was still bad (actually unusable compared to the Jazz-style bass I also played that night). I was finally forced to accept that it was perhaps the pickup that was to blame - at least I tried everything else first.

This pickup, as had a few sets installed and written about here before, was hand made for me by a pickup builder in Santa Fe Springs, CA. I have loved his P and J pickups, so I asked him to build me a '51 single coil bass pickup, which he said he had never done before. I don't know if his first stab at this just didn't turn out great, of if the problem is the pickup design in general (remember, I never liked the other two Fender Japan reissue '51 P Basses I owned), but this was just not cutting it. I tried repeatedly to get in touch with Mark to see if he could remake it, or even try a split or stacked-coil version (which would also be noiseless), but since mid 2015 I have been unable to reach him. He has either moved, or changed his number and email address, or went out of biz, or...

Remember Sting's '54 P-Bass? I read up on it, and his guitar tech had installed a Seymour Duncan Custom Shop stacked-coil in it (which is not only quieter, but with more traditional P-Bass low end and tone). I spent sometime searching for an affordable stacked pickup option (unlike the SD Custom Shop pickup, I am VERY cheap), but luckily found a used Custom Shop SD for about $150 shipped. With all the time and $$ invested in Choco, I decided now was not the time to cheap out on the pickup, so I bit the bullet and went for it. 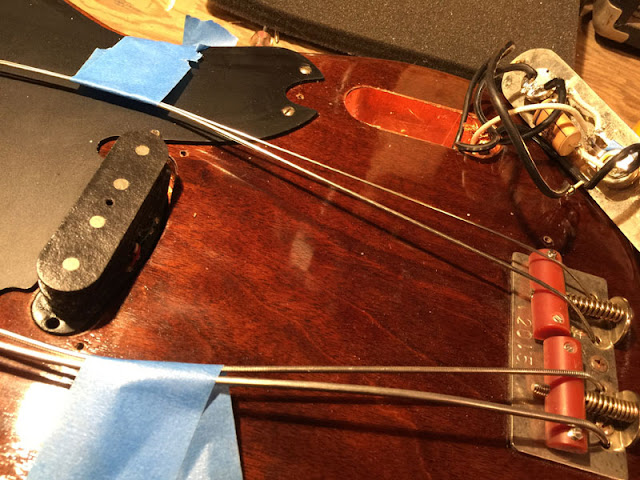 After installing this pickup and plugging in - BAM - everything sounded GREAT! La Bella, please accept my apologies, your Low Tension flats are as amazing as your other strings (it's very buttery and balanced), and this bass has so much low end now that, well, it almost has too much bottom. I was able to readjust the string heights to a playable level, and even drop the pickup back a hair so the bass is vintagy warm without distorting. 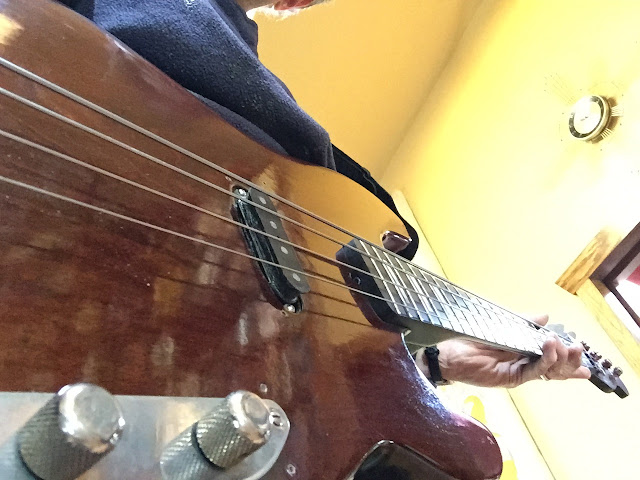 Last but not least, I purchased some glossy black single ply pickguard material. Using the altered one, I cut a final and perfectly-fitted pickguard that hugged the bottom of the neck, closing up the unsightly gaps (not unlike cosmetic dentistry). 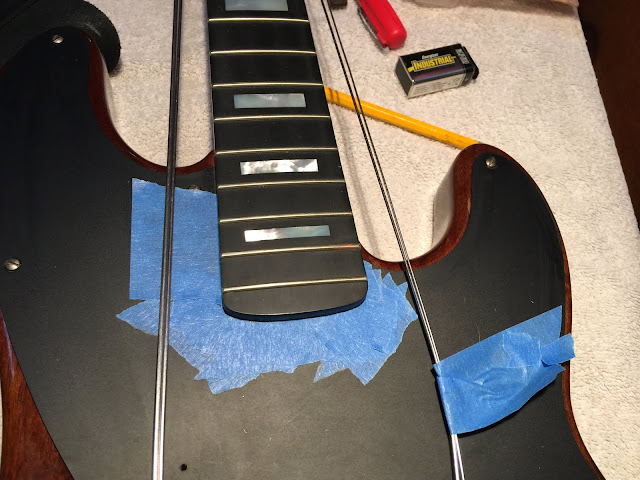 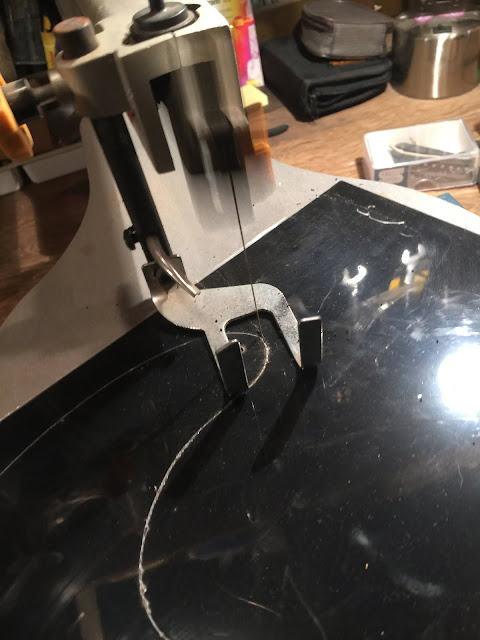 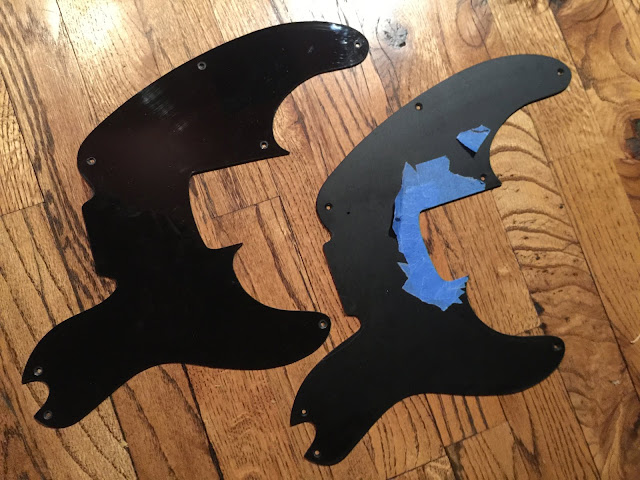 And so, my build of what was originally a simplest/primitive bass guitar design is complete. Instead of simple, it was probably the longest and most complex build I have ever attempted, considering all of the fixes and tweaks required to finally dial it in. In the end, it is a true hybrid of the simplest and most advanced instrument materials and technology, with a heavy single piece wood body and oil finish complementing a state of the art modern pickup and graphite composite neck. It plays incredibly easy and smoothly, has very low tension, and has a huge full tone. The only drawback might be the weight, but it hasn't been a problem for me as I rarely use the same bass all night anyway, and when it comes to tone and mass - with basses - you usually get what you pay for (so to speak). I look forward to recording with this beast someday.

Cases are very important to me (to protect and transport), and I really felt that Choco deserved a special home to live in. A local Craigslister had posted a few of these oddly-shaped fiberglass bass cases, and I offered to trade him what was my first acoustic guitar, given to me by my parents on my birthday when I has probably 15 or 16 years old, but with which I have absolutely no use for these last couple of decades (I have a wonderful Gibson J45 I purchased new sometime around 1998). I have tried selling it so that another young budding guitarist might play it, but could not even find someone to give it away to. Hopefully this case dealer (he had so many cases!) will sell it to someone looking to learn guitar, and I now have a fitting (and well-fitted) retro-looking but very protective case for Choco to reside and be transported in, when it's not sitting on a stand right next to my desk for easy and regular noodling. A lesson in patience and perseverance, and an instrument to cherish. 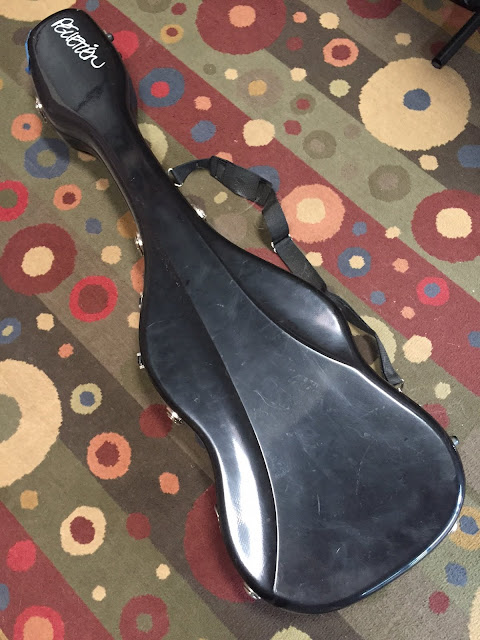 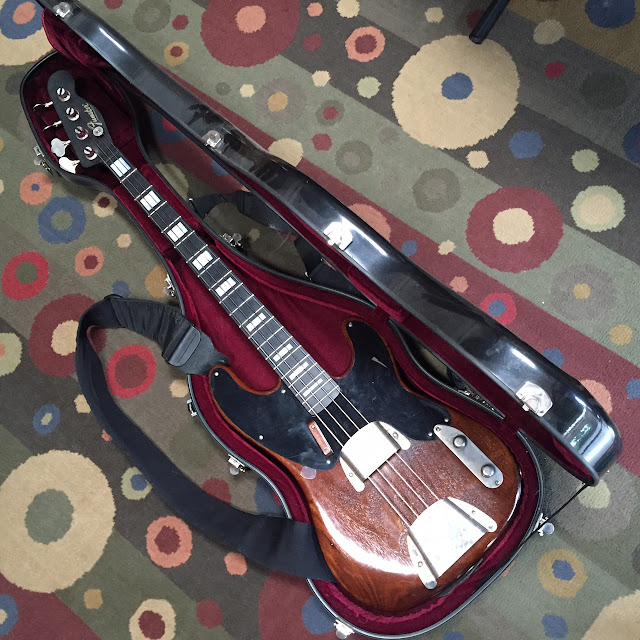 We recently watched a bio pic of the writer/director Nora Ephron, which included her list of favorite things she will miss (written while she was slowly dying of cancer). Aside from the argument that, once dead, you are not actually capable of missing anything, my list must include salted dark chocolate. Although my sweet spot (pun intended) for great dark chocolate is in the 65-70% range, I got an online offer to try Godiva's web store, and ordered their 3-bar Dark Chocolate Lover's Tasting Set. The 72% was OK if slightly more bitter than I prefer, and the Dark with Almonds was OK as well, but the set also included a 50% with Sea Salt. 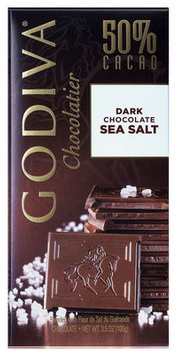 This chocolate bar is super smooth and surprisingly now one of my very favorites, and I say that knowing quite well that it's from a very mainstream, large corporate chocolatier (originally Belgian, but still made in Germany). As their flavors tend to be a bit darker than I expect, the 50% turns out to have the right amount of sweetness to go with the salt. This 3-pack sells on their site regularly for $13 plus shipping, but they periodically offer free shipping along with other deals. The first time I ordered this, it costs me about $2 total, and arrived in a ridiculously large box packed with ice. It occurred to me that maybe that's how they ship just your first order, in order to convince you to buy again, and although the next time I ordered this same 3-pack it came in a smaller box with no ice, all other orders since have been over-packed the same as my initial try-out.

As I only really love the 50% w/salt, I have emailed asking if they would consider ever putting that one on sale (as a 3 pack, or whatever). They said they would keep it in mind, but I'm not holding my breath. I occasionally reorder this sampler pack and put up with the other two bars in order to be able to enjoy this one, but just a few weeks ago I saw the 50% w/salt on sale at Walgreens for $2.50 each/4 for $10, so I'm sure it will grace my chocolate drawer again in the future.

Yes, I have a chocolate drawer. I shares the space with my forks and knives, but make no mistake - it's NOT a cutlery drawer. It's a CHOCOLATE drawer.
Posted by Joel Pelletier at 6:03 PM