(originally posted August 2015) It's been a while since I've posted anything new (disappointing both of my readers, I'm sure), but it's not because I have not been building/rebuilding/contemplating basses - and chocolate, of course. The Swiss Army Knife Jaguar bass I built in 2014 has morphed two times already; lacking real presence on the bottom end, I first replaced the active EMGs with a nice new set of passive P/J pickups courtesy Scott Wunschel at EMG Pickups, but it still lacked something compared to some of my better basses. Next I replaced the custom Moses neck with a very nice (and reasonably priced @$120) bound vintage tint Japanese-made Jazz bass neck, a bit more in line cosmetically with Jaguar basses. 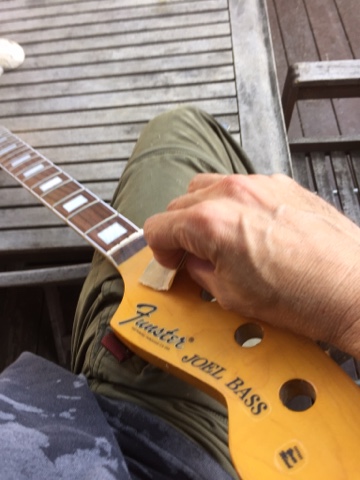 Applying my Funster decal to the bound neck 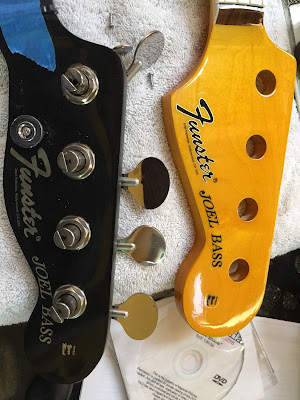 The Hipshot Lollipop tuners also get moved over to the new neck. 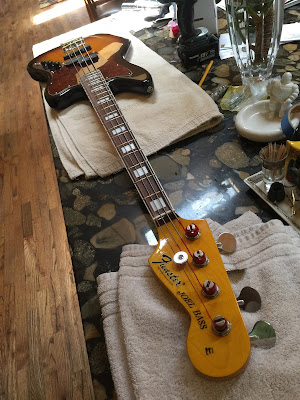 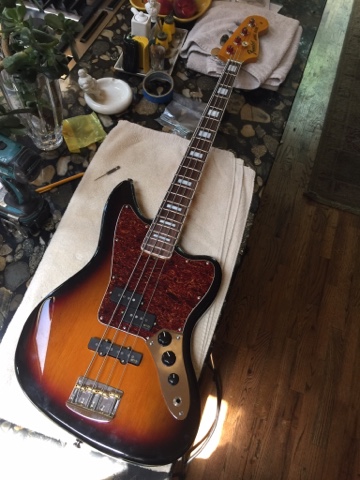 At home on my little amp it still seemed to lack a strong E string, and I'm of the opinion it's because of the lightweight basswood Squier body. I went on eBay and found tonewood supplier Classic Tonewoods (and classictonewoods.com) who had listed a solid one piece Walnut guitar blank. It was just big enough for a Jaguar bass body, so I thought I would try it. He planed and cut the body shape for me, and it's a gorgeous piece of wood: 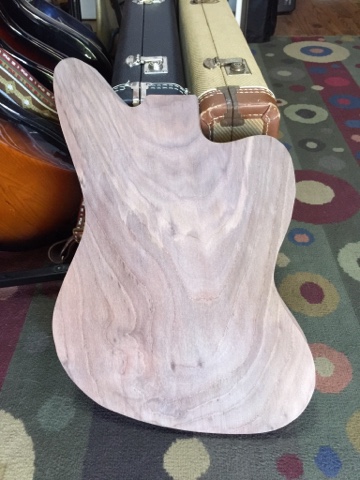 Walnut on my mind

This brings me to the topic of Walnut (and, to me anyway, it's relation to chocolate). I grew up in a carpenter/builder's home, and would spend many hours in my dad's shop working with woods, occasionally ruining and/or losing his tools (I still have a couple to this day, but I've made it up to him by occasionally buying him a new ones). Other than Pine or other similar soft woods, the only hardwood I had regular access to was Oak (I can still remember the Oak paneling in the first home we lived in, which we moved out of when I was 4 or 5yrs old). I started working with smaller pieces of hardwoods by the time I got into wood shop in high school, where I made one of the first basses with a nice piece of Ash the shop teacher was squirreling away for his own uses (he was NOT happy). Three of my earliest home-made basses, one fretted and two fretless, were made all of Oak. I still have the fretted "Flinstone bass" and an unfinished fretless, but regret having sold off the other finished fretless decades ago. 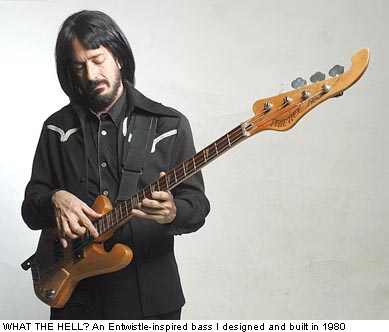 Once in college and playing in my first real band (a Rush tribute with a generous helping of Zeppelin, The Police, etc), I acquired a very nice Fender Jazz neck (to this day the neck width and profile I am most at home playing), and made a body out of Walnut. As I remember the body shape was kind of a cross between an Explorer and a Rickenbacker, but no photos of it exist that I can find. I still remember the smell of the Walnut dust, and the dark brown color of walnut, stained and sealed, is to me the ultimate delicious brown (I built much of my current kitchen cabinetry and counters out of Walnut): 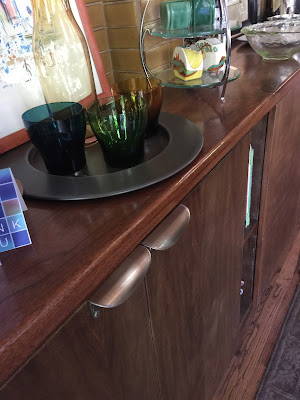 It's also a rather heavy and dense wood, which is SUPPOSED to translate into more mass and deeper bass; one of my best and fullest sounding basses is the 13lb Precision featured in the header image with the chunk of chocolate. I'm trying to remember the tone of that college Walnut-bodied bass, but as it was early in my playing career I didn't have much to compare it to. All I can remember is that it played very easily, and I played this bass exclusively for 4-5 years, before taking out my first ever bank loan to purchase a Steinberger L2 bass (mentioned briefly in a past post, and to be featured in one in the near future). I still have the L2, but the Walnut bass with the Jazz neck must have been sold soon after, because I no longer have it. The Steinberger was essentially my only bass for the next almost 20 years, simply because there was no way to improve on it, which I realized the second I played my first one. Only until I joined a Who tribute in the mid-aughts did my full blown Bass Lust emerge, and I became interested in having and/or making many other more traditional (wooden) bass guitars.

The extra weight and mass of Walnut, along with the beautiful dark brown color, makes the wood a very attractive alternative to the lightweight basswood Jaguar body, and might just solve the problem that still plagued this bass. But it also seemed to me that, along with the now available black Moses neck, an oil-finished Walnut body could make a very aesthetically pleasing P Bass, in the style of the original 1951-4 Fender Precision (now sometimes called a Telecaster Bass), but with a more organic contoured body like Fender started offering by the mid-1950's. 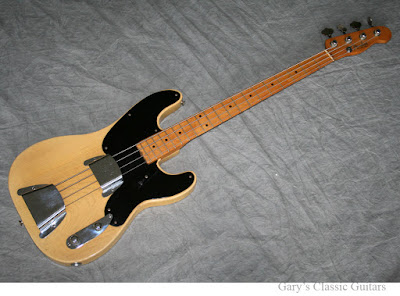 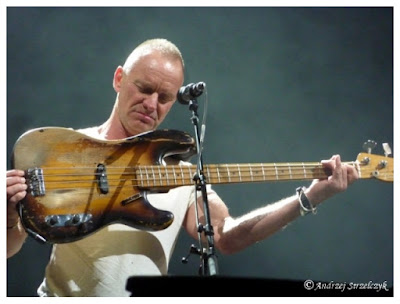 Sting's beat-to-shit '53 Sunburst Precision Bass, all original except for the bridge and pickup, an updated split-coil Seymour Duncan model.

I have owned two of the Japaneses Fender re-issue 51 Precision basses, and even with some pickup and bridge mods they were ultimately disappointing. The neck seems needlessly chunky, and to me the tone was never great, neither full nor bright enough, so both were traded/sold. But Sting has used one of these basses as his ONLY go to bass for more than 20 years, so there must be something to them (there certainly must be something about THAT one). Maybe this combo of a Jazz profile neck (even though it has a Tele-style headstock) and Walnut body, with the right pickup, would give me both a dark, warm tone and the visual equivalent of a nice dark chocolate.

I tracked down a Walnut P Bass body on eBay, but when it arrived I found too many problems with it, including being thinner than advertised, with edge routing too extreme for the pickguard, etc. While processing the return, I again checked with Tyler at Classic Tonewoods, and he had this beautiful 1-piece blank: 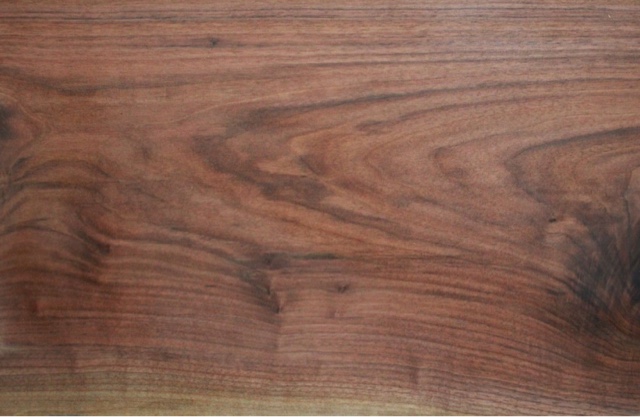 I was informed by the shop I was going to use to route and drill the Walnut Jaguar body that they needed an uncut blank to put it on the CnC machine, so although I was SOL with the Jag, I could (hypothetically) get a precise, computer-controlled cut, routed and drilled Precision Bass body from this Walnut board. I called the grower and made the deal, and took delivery of this beautiful one piece Walnut blank.

Knowing that this project would move forward, I consulted the bible of early Precision basses for details on parts, builds and finishes, Detlef Schmidt's FENDER PRECISION BASSES 1951-1954: 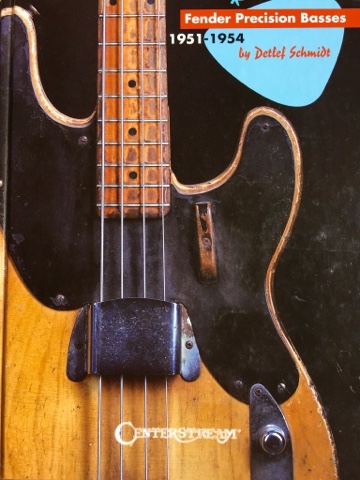 Finding this book ruined me. After giving up on two of these basses (albeit reissues), I never thought I would care about this model again. But this book reignited my interest in the original electric bass, and although I will never be a high-dollar collector, of course I was bound to build one. The great thing about the book are the photos and descriptions of many of the earliest models, giving this copy monkey everything he needed to either duplicate, or if I chose, deviate from the original design. It also meant I would be able to better recognize the manufacturing errors and problems with all of the parts assembled for my build, making it a much longer and more tedious process than I could have anticipated, but theoretically and ultimately correct.

In Part 2 we will see just how many problems, inconsistencies and mis-fitting parts there can be in one build, and the patience required to overcome these challenges.

Ok, it's a trite phrase, and since I've never actually done crack it's difficult to really compare, but I have heard the crack is "really wonderful"...

On my most recent gig trip through Tokyo's Hamada Airport, I found this chocolate in a refrigerated case at Duty Free: 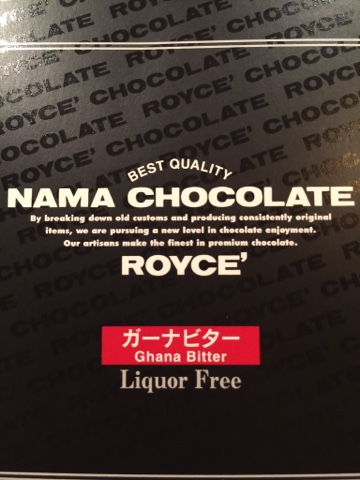 Oh Nama! This stuff is very similar in textured to very fine fudge, but much lighter and devoid of all that dairy. It's triple packed inside, comes with a sort of wooden serving knife, and is supplied with ice packs to keep it cold until you get it home. 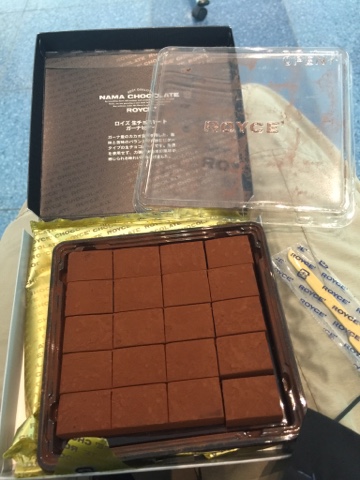 Needless to say the first box barely made it home (I had eaten most of it during the 13 hour delay and 11 hour flight back to Los Angeles). But after trying the first piece at the airport, I purchased a second sealed box to open later. The texture is incredibly smooth, and the flavor is EVERYTHING I could possibly ask for from both chocolate and bass guitar tone. It's so rich that a couple of small pieces per sitting is more than sufficient - very dark chocolate, but extremely smooth and not at all bitter - and keeps for weeks in the refrigerator. We chocolate snobs would never consider putting good chocolate in the refrigerator, because it would ruin it (mostly by separating the oils from the solids), but whomever came up with this confection deserves a Nobel Prize in Chemistry (my apologies and congrats to actual Nobel Laureates).

Finding this while in the middle of my Walnut bass build, which I was already going to name Chocobass because of the dark brown finish I planned for the Walnut body, now presented a challenge. As careful as I am while building a bass, selecting the neck and body, accumulating complimentary parts, and patiently assembling the instrument, I never really know if the end result will actually be what I have hoped for until it's completed. I know Chocobass will look delicious, but could its tone also have the same deep, dark and rich (without bitterness) flavor as this amazing Japanese chocolate?

Posted by Joel Pelletier at 3:06 PM