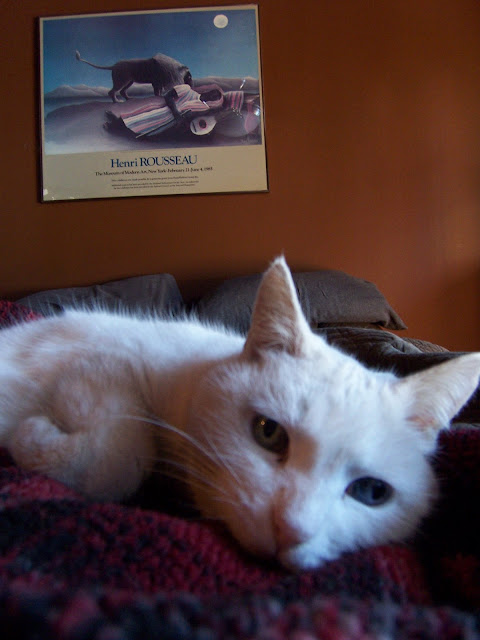 Right after midnight on February 11th, 2013 my 19 year old white kitty Pepito died on my chest, a remarkable experience (for both of us, I am sure), and the culmination of the longest continuous relationship of my life. As it happens I had been accumulating parts for an off-white Jazz-style bass featuring an extremely light-weight (under 3lbs) body, the lightest neck I had (a Mighty Mite), and Hipshot Ultra Lite tuners. Built around the same time as the 10lbs+ Precision-style bass I wrote about in April 2013, this one was going to be an experiment in the opposite direction - the lightest traditional-style bass guitar I could build (the idea being that Precisions need more mass for that bottom end, whereas Jazz basses can be lighter because their tone tends to emphasize the mids). Pepito the cat was always on the small side, and when he died he actually weighed about 4lbs; the next day, in honor of him, I assembled what I call the Pepito Funster bass. 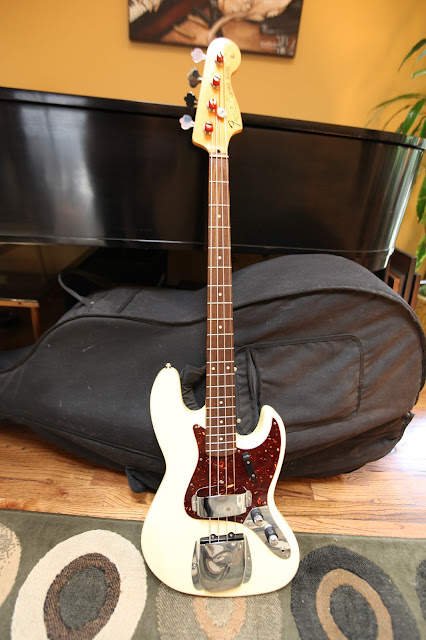 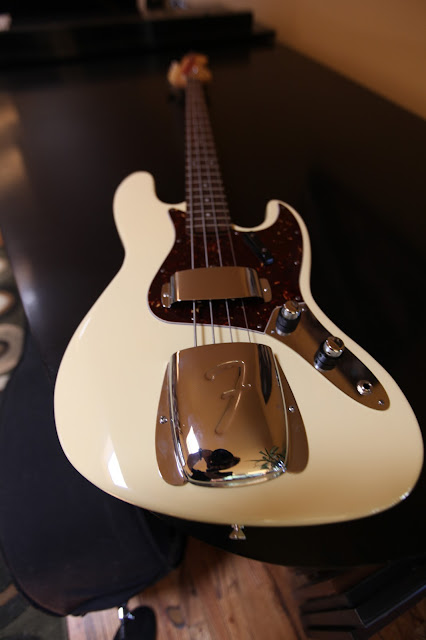 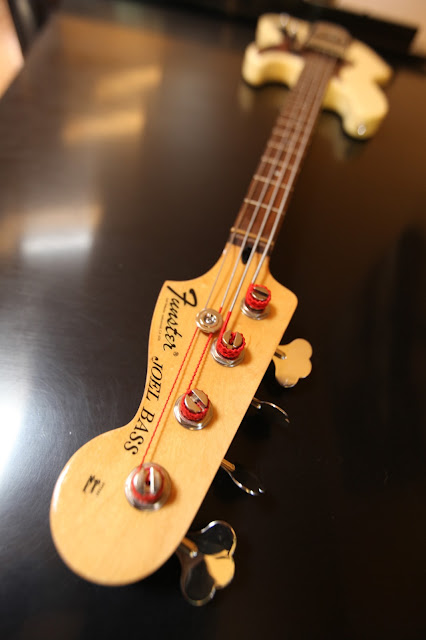 I had never owned a 62'style Jazz with concentric pots, so I thought I would go that route with this bass (John Entwistle claimed the concentric pots provided a better tone, but I can see why Fender went back to one tone control - who needs separate tone controls for both pickups?). This bass weighs in under 6lbs (!!!), and is very well balanced thanks to the Ultra Lite tuners. I normally hate the metal bridge and pickup covers because they limit the range of dynamics I can get by either playing the strings in different spots, or muting the bridge a bit with the side of my palm when required, but I wanted to go totally showroom stock on this one. The color combinations are so classic, and although I used one of Hipshot's more modern bridges, it would be covered by the bridge plate (even though the extra shape on the bottom of the bridge made it difficult to fit the bridge cover properly). The pickups are a new set of Fender Custom Shop Vintage 60's, the underside of the Fender tortoise pickguard and all of the pickup and electronics cavities are very carefully shielded with copper tape, and the strings are LaBella flat wounds; every possible vintage-style part was used to get that vintage passive tone.

I first chance I had to play it on a live and loud was an outdoor Zeppelin gig, and oh my, it certainly sounded huge and full! I actually had to hold back a bit; compared to my normal Jazz-hybrid bass that I use for Zep (with Fender Deluxe active pickups and electronics) this thing sounded WAY bigger. I have to say I was pretty blown away - I did not expect the fullness with such a light body (it's not  Ash or Alder, I think it's Paulina or some other Pine-like wood). What I did notice, however, was something weird in the E string, which I confirmed at my next two Zep gigs - except for the open string, there was some weird doubling going on, and the intonation on the E way way off, with each higher note more out of tune (songs that stayed in first position were great, songs higher up - like Dazed and Confused - sounded very dazed and very confused).

I just assumed there was problem with the neck, and planned on replacing it with a better one I have used for years on another Jazz bass. But as I thought about it more, I decided to try a few other tweeks before I gave up on the neck: 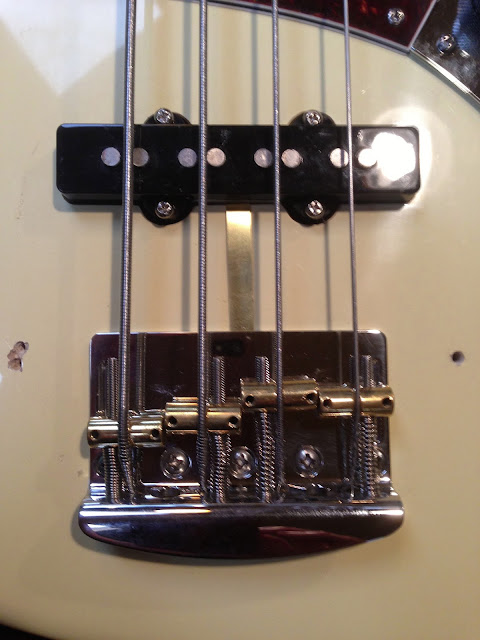 The main problem as I saw it was the bridge - I think I installed it just a bit too close to the nut on the body, and it made intonation difficult, especially on the E string. I took this opportunity to change out the bridge with a standard Fender-style with tapped saddles, thus allowing the bridge cover plate to fit more properly. I moved the whole bridge back another 3/8" so intonating should improve (and that weird stuff on the E, probably caused by choking it off too close to the bottom of the bridge, would HOPEFULLY be taken care of as well). 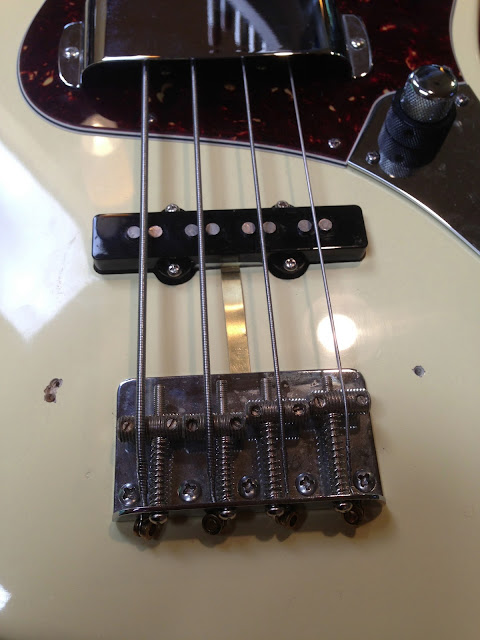 The other issue could be the nut - it was a brass which I love, but the neck required a flat bottom, and this brass nut was rounded, so the fit was never going to be solid. I replaced it with a plastic one - if this solves the tuning issues, I'll order a better brass one with a flat bottom to install later. 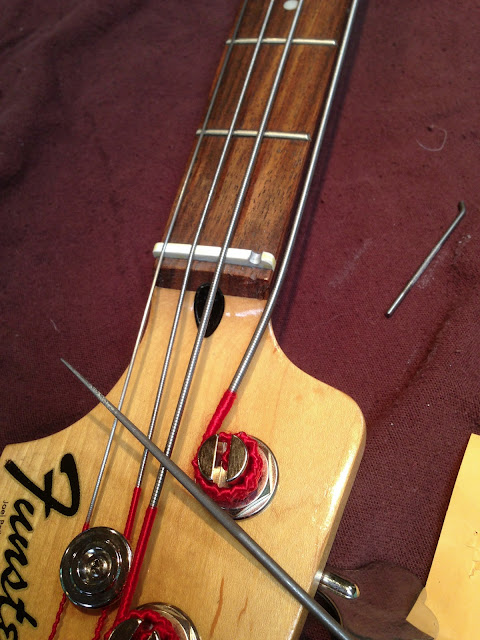 I strung it back up and - problem gone! After another 60 minutes of intonating, adjusting string heights, tightening the truss rod for a straighter neck, and filing the nut slots down quite a bit more, Pepito now has fantastically low action, great intonation, and is smooth and buzz-free up and down the neck. Plus, the bridge cover plate now fits properly! 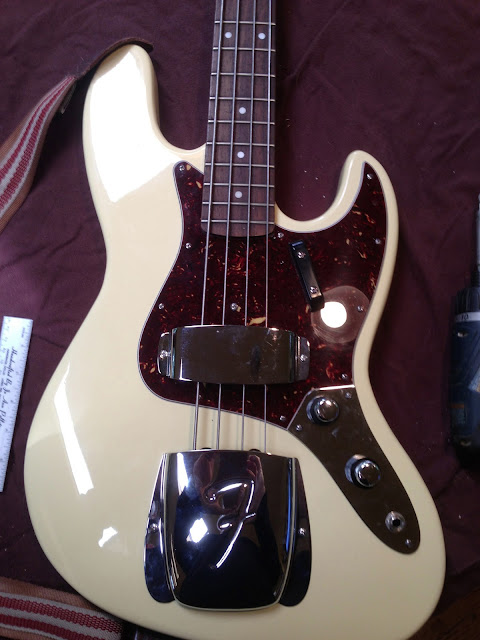 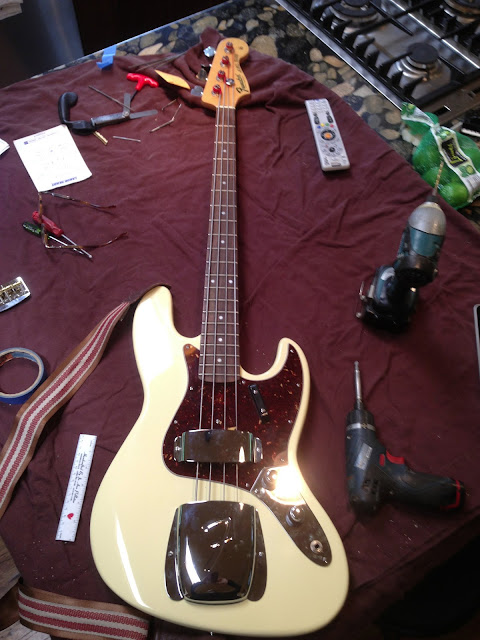 I am very much looking forward to playing this thing through my big rig with a band, and believe it will not disappoint. But the proof will be in the playing - how it feels in my hands, how it sounds on the stage, and comments after the gig from the soundman (who will be able to tell me how balanced it was, and whether or not it needed any additional EQing, etc.). I am happy that I could correct it with the original neck, which I had already date-stamped 2/11/2013, and hope to be performing with Pepito in my arms for many years to come.